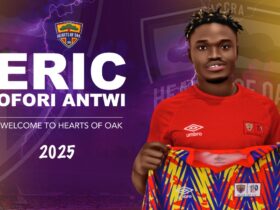 Aduana Stars are on the verge of signing former Hearts of Oak defender Larry Sumaila.

The right back is now a free agent after Hearts of Oak refused to extend his contract.

Sumaila left Hearts of Oak at the end of the 2021/22 season after serving his contract.

The 23-year-old was part of four players released by Hearts of Oak.

Aduana Stars have since been in talks with the player and now set to hand him a two year deal.

The hard working defender is currently in Dormaa to complete formalities with the former Ghana Champions.

An announcement will be made should agreement be reached between the two parties.