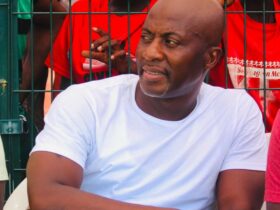 The Court of Arbitration for Sport (CAS) is expected to lift a ban on Kotoko midfielder Richmond Lamptey.

The midfielder is currently serving a two year ban from the Ghana Football Association for his engagement in a match fixing scandal.

Lamptey’s name popped up as one of 26 players to have been involved in the act two season ago during a League game between Ashanti Gold and Inter Allies.

Kotoko, the player’s current club appealed to CAS over the ruling from the Ghana Football Association.

A positive decision is expected to be made in the coming days as CAS believe there were not enough evidence against the player.

Meanwhile 21 out of 26 players who were serving bans have their punishment suspended by CAS per reports.

Kotoko will need the 25-year-old in their CAF Champions League campaign next season.