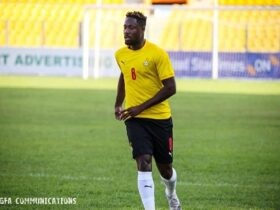 Ghana pair Fredrick Assor & Rodulf Mensah could not make it in the Men’s Tandem B 1000m Time Trial at the Lee Valley Velopark Veladrome.

The duo were 5seconds short off Kenya, missing out on a chance to advance after making a time of 1:24second.

Ghana was aiming to make an impressing in the Men’s Tandem having already missed out on both the men and women Triathlon as well as the Women’s boxing which saw Orllena Sathoud losing to England’s Kerry Davies.

Ghana will sort to make an impact at this year’s Commonwealth Games and hopefully better their performance in the competition this time around after winning just a medal in the last edition in Gold Coast Australia.