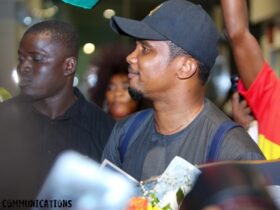 Ghana’s female hockey team suffered a 5-0 loss to India in their opening game at the Commonwealth Games.

The Ghanaians could not match up a strong Indian side ranked 6th in the World.

Despite starting the game on a good note, Ghana conceded the first after just 4min but held on through to the first quarter.

India capped their dominance in the game with a second just after the 1st quarter and then went on to score three more goals in the second half to start off their campaign on a good note.

Ghana will now take on host England in the next game.