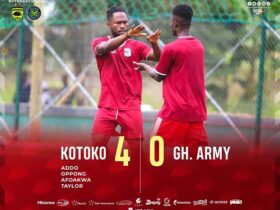 Ghana’s Joseph Amoah made it to the finals of the Men’s 200m at the Commonwealth Games after finishing 2nd in Heat 3.

The Ghanaian finished behind defending Champion Jareem Richard’s of Trinidad & Tobago with a time of 20.51sec.

Amoah will hence be running in Sunday’s finals with hopes of grabbing a medal for Ghana after compatriot Benjamin Azamati missed out narrowly in the 100m finals when he finished 4th.