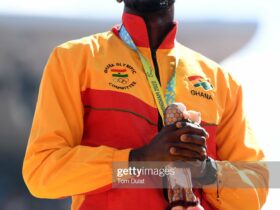 Joseph Paul Amoah has made it to the semifinals of the Men’s 200m.

A time of 20.58 was just enough to send the Ghanaian through to the semis after finishing first in his Heat to grab an automatic spot.

Amoah becomes the third Ghanaian to make it out of the Heats in the sprint event after Benjamin Azamati and Sean Safo Antwi made it past the first round in the 100m with Azamati going all the way to the finals only to miss out narrowly on a medal.

Meanwhile youngster Abdul-Rasheed Saminu who was making his first appearance on the global stage could not make it to the semis of the Men’s 200m after finishing 3rd in his Heat.

Both Amoah and Saminu will be in the tracks again to compete for Ghana in the Men’s 4×100 relay.