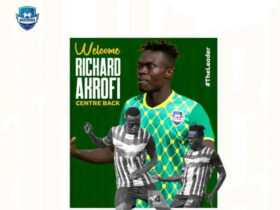 Lomotey arrived in the Swedish capital from French side Amiens in an undisclosed fee.

The former Ghana U23 midfielder had a good season in the Ligue 2 which attracted interest from Malmo.

The 24-year-old made as many as 29 League appearances for Amiens in the Ligue 2 last season.

Malmo will be in the UEFA Champions League after winning the Swedish top flight last season.