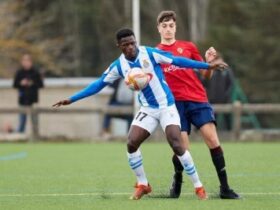 Manchester United got off to a poor start in the English Premier League after losing 2-1 at home to Brighton & Hove Albion.

The Red Devils failed to take advantage at home as they missed out on valuable points.

Pascal Gross scored Brighton’s first on the half hour mark before adding another just before half time.

Manchester United however return from the break much stronger in search of a goal and finally found the back of the net from a scrappy own goal in the 68th minute.

Brighton held their ground to avoid any goal there after as they picked valuable points at Old Trafford.

Meanwhile Leicester City were also held to a 2-2 stalemate at home by Brentford.

Liverpool on Saturday were also held to a 2-2 draw away at Fulham.

Tottenham Hotspurs got off to a flying start by thrashing Southampton 4-1 at home, whiles Bournemouth marked their Premier League return with a 2-0 win over Aston Villa.