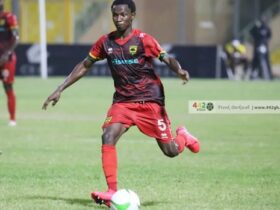 The 26-year-old signed a two-year deal with the former CAF Champions League winners after a short spell with Legon Cities.

Atte joined Cities on a brief after signing a 6months deal with the Club having left WAFA.

The defender played a key role in the team’s 2021/22 League campaign where he managed 15 appearances.

TP Mazembe will be the next destination for the Togolese International who has been plying his trades in Ghana in the last five years.

He settled on the Congolese Premier League record holders despite receiving couple of offers in across the continent.