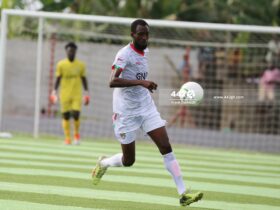 From the information gathered from sources, the club has been in talks with Ludogorets for a while and is expected to complete his signing very soon.

Since signing for the Bulgarian giants from German club Schalke 04, Bernard Tekpetey has worked very hard to become one of the best players in his position in the division.

Today, sources are reporting that Ludogorets is in advanced negotiations for the sale of winger Bernard Tekpetey.

The winger is reportedly close to a transfer to the Portuguese side SC Braga. The two clubs have been in talks for some time and are already close to an agreement. The Eagles are expected to collect around 1,900,000 euros.

In the last few weeks, he has been also linked with a move to Dutch side Feyenoord.