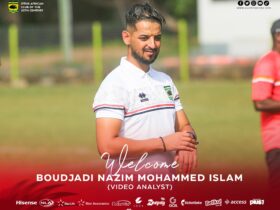 Stoke City have completed their eighth new signing of the summer with Tariqe Fosu arriving on loan from Brentford, the Club are delighted to confirm.

The 26-year-old, who can play as a wing back on either side as well as an attacking midfielder, will spend the 2022/23 season at the bet365 Stadium.

London-born Fosu progressed through the academy at Reading before making his debut for the Royals at the end of the 2014/15 season.

Loan spells with Fleetwood Town, Accrington Stanley and Colchester United followed before he joined Charlton Athletic on a permanent deal in 2017.

After helping the Addicks to the play-offs in successive seasons, Fosu moved to Oxford United in the summer of 2019 and scored 10 goals in the first half of the season.

His impressive form at the Kassam Stadium prompted Brentford to swoop for his services on the final day of the January transfer window.

Fosu helped the Bees reach the Championship play-off final in his first few months at the club before scoring four goals in 49 appearances as Thomas Frank’s side sealed promotion the following season.

It was during his time at the Gtech Community Stadium that Fosu was called up to the Ghanaian national team, for whom he has scored once in four appearances.​