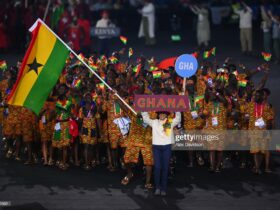 Hearts of Oak have announced the signing of Cameroonian forward Junior Kaaba.

The attacker joined the Ghana FA Cup Champions after completing his medical season.

Kaaba signed a two year contract to keep him at Hearts of Oak until 2024.

He will now join his new colleagues to prepare for the new season as well as the CAF Confederations Cup.

The striker comes in to replace Kofi Kordzi who was released by the Club recently.