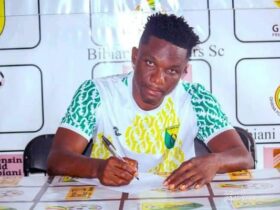 Hearts of Oak Goalkeeper Richmond Ayi could be on his way to American Club FC Cincinnati.

The Major League Soccer side are said to have been impressed with Ayi having watched him for sometime.

The 25-year-old after a difficult start to the season managed to command the number one spot at Hearts of Oak at the expense of regular Richard Attah.

After emerging as one of the standout performers at Hearts of Oak, Cincinnati could be the next destination for the former WAFA and Eleven Wonders glovesman.

FC Cincinnati signed youngster Salim Adams from Hearts of Oak just before the end of the season and are now willing to make the former Ghana U20 goalkeeper their next signing from the Ghanaian giants.

Hearts of Oak established a strong relationship with the American Club after both parties signed a partnership agreement.