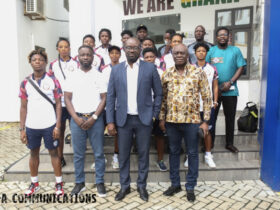 Inaki Williams scored his first goal of the season for Athletic Club in their League match against Cadiz.

The Ghanaian found the back of the net early in the game but had to make way in the 52nd minute after picking up an injury.

Williams,27, holds the record for playing the most consecutive games in La Liga having started the previous 236 games.

The forward’s record is now in jeopardy should he fail to feature in his side’s next game this weekend.

The player recently announced his allegiance to Ghana having been overlooked by Spain.