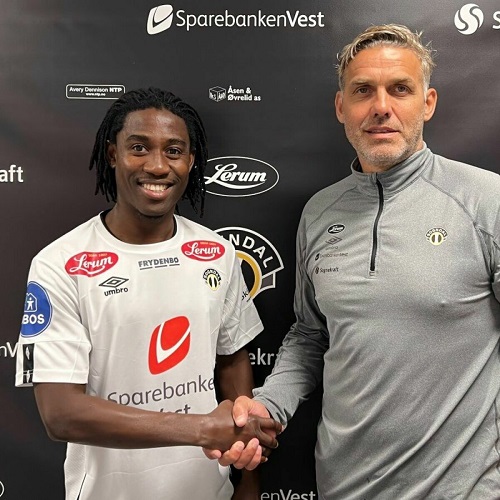 Twum, 24 joined the club from Mjøndalen IF on a three-year deal after passing his medicals.

Twum moved from Ghanaian side Inter Allies FC, and came to Norway to IK Start in January 2018.

After his capture, the coach has described Twum as a player that fits the bill.

“After a long period of work, it is ultimately time to get the signature of Isaac. I’m very happy that he value to us and with what ive seen he’s the type of player I have looked for, for sometime now,” says Sogndal Fotball head coach Tore Andre Flo.

‘Isaac will compliment the middle ground nicely with the others, and with his strong signature he will vera ein defensive power and stabilizer, as well as an offensive ball advantage with the rest of the team.”

“It’s very nice that Isaac is here and he’s welcomed to the team! He’s and interesting person and I’m very glad to know that he’s a nice guy,” says Flo.