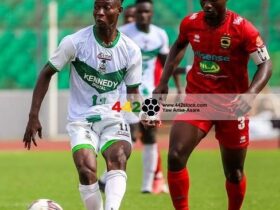 Ghana midfielder Emmanuel Lomotey believes he has the qualities and attributes to help his new club Malmö FF.

The 24-year-old joined the Swedish club on a four-year deal until 2026 after passing his medicals.

“I feel a great pride. Malmö FF is the biggest club in Sweden so I am happy to be here and looking forward to start training with the team,” he said as quoted by the club’s official website.

“I think I have qualities and attributes that will help the team. The goal is to help Malmö FF win titles and play group games in Europe. Together with my teammates, we will achieve as much as we can together.”

A 20-year-old Lomotey moved to Extremadura UD in the Spanish third division after a year and a half in the domestic league.

In total, he played just under 50 games in the Spanish second and third divisions, both for Extremadura and Villarreal B before continuing his career at French side Amiens SC.

In Amiens, he played for himself a regular place and over two seasons featured in 55 games in Ligue 2.

Lomotey, who can play both in the midfield and in the back line is expected to play a key role for Malmö FF this season and beyond.