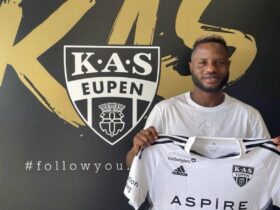 The slippery forward inked a rolling two year contract with the North African side after completing his mandatory medicals.

Known as Messi for his deadly left foot, Maxwell Baakoh played starring role for Wa All Stars FC in their 2016 triumphant season including an opening day brace at home to Sekondi Hasaacas at the Wa Park.

He later on moved to Karela United FC before making his name with Asante Kotoko SC under CK Akunor.

The intelligent attacker has been tipped by pundits to evolve into a national team player thanks to his enormous abilities with the ball at his feet.