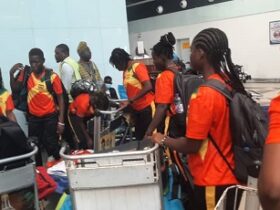 Mr Robert Otieku Duncan, the Central Region Football Association Chairman, has made passionate appeal to clubs to desist from using social media in tarnishing the image of the association.

He said club administrators should rather use the medium to promote and protect Football to attract potential sponsors and to encourage more businessmen into the game.

Mr Robert Duncan gave this advise when he met clubs at Awutu Senya East and Gomoa East at Kasoa as part of his Regional tour of districts.

The visit is aimed at getting first hand information from all stakeholders and to address their challenges to enhance development of grassroot football.

He entreated clubs to use the right channels in addressing their grievances but not run to the media to publish stories that destroys the very product they are selling.

The ace administrator took time to answer questions from club Officials including the media men who were present.

Most of the questions centered on player registration and delays in printing of player licenses. He also answered questions relating “game centers” catch them policy amongst others.

Some club owners expressed worry over availability of good pitches for their training and games. They also appealed to the FA for logistical support to juvenile and other lower division clubs.

From Kasoa, Mr Duncan continued his tour to Swedru where he addressed scores of club officials and referees.