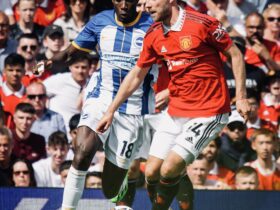 Captain of the Black Stars Andre Ayew says it will be a mistake for Ghana to compare itself to Brazil as far as football is concern.

The Black Stars will take on the five-time champions on Friday, September 23 in Le Harve before travelling to Spain to face Nicaragua on Tuesday, September 27 in Lorca.

Brazil boast of some of the most in-form players in Europe including Paris Saint Germain forward Neymar, Real Madrid duo, Vinicuis Jr. and Rodrygo, Liverpool’s Roberto Firmino and Antony of Manchester United.

“Brazil currently for me is the best in the world. So we are playing the best and we have to acknowledge that they have players playing in the top clubs, week-in week-out, winning trophies,” Andre Ayew said a pre-match press conference.

“We are not going to compare ourselves to them. That will be making mistake but we are going to challenge and go into the battle, that’s 100%.”